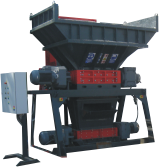 - high shredding performance
- smooth operation even when shredding material with mixture of minerals and metal Photo wooden pallets, energy chip production Video Shredding of wooden pallets ARIES240 Video Shredding od wooden waste ARIES160
The design of four-shaft shredder of the ARIES series employs a compact two-stage vertical arrangement of a pair of two-shaft shredders. Such a principle is used namely for an output fraction significantly lower than obtainable by a two-shaft shredder. In practice, the material is pre-processed in a first stage to a rough fraction and passing the cuttings from the first stage to the second one brings a fine fraction cuttings.
Processing of material in the four shaft shredder employs the principle of cutting and scraping material on the edges of discs placed on two pairs of working shafts turning against each other. Two sets of tearing discs having the same width with hooks around the perimeter, set on two parallel shafts are the working tools both in the upper stage and bottom stage. The machine is located on a separate stand and is equipped with an infeed hop-
per. The processed material falls into the area under the machine on the floor or into a prepared container possibly a conveyor.
The automatics controller prevents the overfilling and overloading of the machine.When the machine is overloaded it turns (3-4 rota- tions) in the opposite direction and, if the reason for overloading is not removed by this reverse turning, the machine stops (the automatic system switches off the machine) and a failure is reported. The control system can even control the drive of the load-up and lift-up conveyors. Moreover, the infeed hopper can be equipped with sensors of minimum and maximum level of material. For minimum quantity, the machine is switched off, for maximum quantity the input of the processed material into the infeed hopper is interrupted.
The shedder can be equipped by a hydraulic pusher that enables processing of a large-volume scrap material (e. g. plastic barrels) by periodical pushing of the material into engagement of shred- ding discs. The service platform can be also delivered, helping the operators to feed a large-volume scrap material manually respectively to clean a machine efficiently.